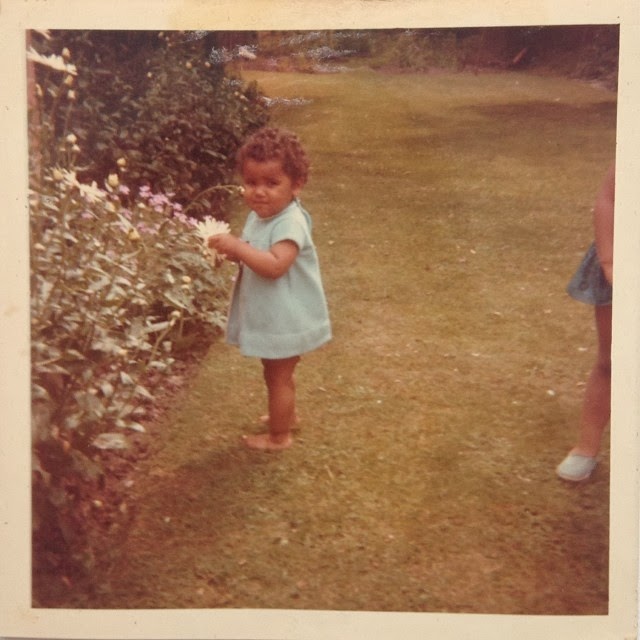 It's my middle sisters' birthday today. The sister who is three years my senior. She's the one who famously, used to lock me in our parents room when we were young and make me learn hymns. That one. I would often take my time getting dressed in the morning so that I could see which clothes she picked and then I would pick clothes that matched hers as closely as I could manage. She found this annoying. She is also the one who found me at the side of the house, hiding, when I'd fallen into a river nearby and got swept away and had been rescued by some locals from our area. She convinced me that it was the right thing to tell mum the truth and helped me pluck up the courage to enter the house to explain away my adventure.

I used to sit outside her bedroom door and watch her read just because I wanted to be near her. She also found this to be annoying. When at age eleven she left for boarding school, I pined for her. I remember dreaded car journeys to drop her off at school, with a lump in my throat the whole way and pinned as closely to her as I could get in the back seat of the car. I would watch out for the splash of my occasional  tear hitting the leather seat and the sun beating down on us drying it up in no time. I remember trying to make the journey fun, trying to laugh but feeling the hard hitting reality that we were about to be separated by nearly eighty miles and for months at a time.

Once, when we were teenagers and she was no longer at boarding school but was as usual pre-occupied reading a book, and when I felt that she had neglected me for far too long, I used my mum's lighter and kept pretending to light her socks. I never seemed to grow tired of trying to pry her away from what I considered distractions from me. I was, shall we say, pretty persistent. So again, after some time had passed, I'd take another strike at the lighter getting closer and closer to her sock, trying to motivate her to put her book down. Well, eventually she did look up from her book because I had been a little careless and struck that lighter too close to her sock and suddenly I was filled with panic as I saw a blue flame with an orange edge travel up her sock towards the hem of her trousers. I leapt on top of her and threw my flailing arms upon her feet with tears in my eyes and a tightening pain in my chest. She casually looked up and said the words 'I don't want to talk to you, I'm reading my book, go away!' But then, she looked at me and saw the upset in my eyes and began to pick up the scent of her now singed socks. She glanced down and noticed the orange pattern left by the extinguished flame and she guffawed in shock at what she had just narrowly escaped. After shock had left me, I smiled to myself, I had after all got her to look up from her blasted book. Yes!

I pined once again when she was nineteen and left for university. I pined for her at many different times in my life. I longed for her attention many times too. I received it many many times also and drank it in greedily. I pine for her even now, when life is busy and we don't speak for days and weeks, days and weeks. Of course it doesn't matter how many days or weeks or months or years that pass by because we share all of this. It's all stored up. The good stuff, the bad stuff, the funny stuff, the cringey. All of it. I think back to promises we made each other as children and how inconceivable it was back then, to think that we could go these days and weeks without talking and teasing and laughing and fighting and making up and talking and teasing and laughing at each other, at one another, together and apart and all at once. And when I think about it, it's not so different. Yes, there are changes but yes we are still together, still apart, still one another and all at once. And you know, if we lived in the same house now, I'd still sit outside her room. Happy Birthday Ali Pali Poodle!

Posted by Katy Acquaye-Tonge at 04:05

Email ThisBlogThis!Share to TwitterShare to FacebookShare to Pinterest
Labels: birthdays, growing up, looking back, my middle sister, nostalgia, sisters