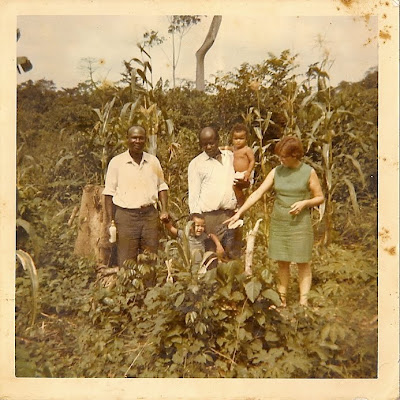 Uncle, my brother Peter, Dad holding my sister Debbie & Mum 1970 Oda, Ghana
For some time now I have been thinking about writing about my mother. So yesterday I decided that my starting point should be looking at some old photographs and as soon as I came across this picture I knew that I wanted to open my blog post with it. It was taken in 1970 on a farm just outside of Oda, Ghana where my dad grew up. Mum is aged just twenty seven here and my dad had taken her to live out in Ghana for an indefinite amount of time, it was only her second trip abroad (on her first trip abroad she visited Spain) she had left Grandma Peppermint behind in England and she had two young children in tow aged one and two years old. 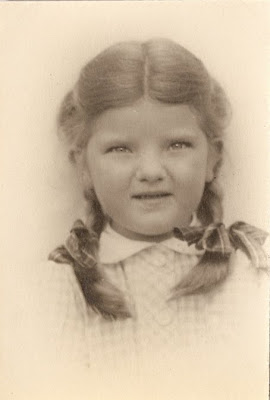 mum aged about 5 years old
Over the years she has been both the subject and inspiration behind many art works that I have produced, one exhibition was somewhat overwhelming for her as I re-created an entire photo album containing pictures of her life (that belonged to my grandmother, Grandma Peppermint) in pencil line drawings, a total of about forty drawings, plus paintings and text work. She is great subject matter mostly because she is humble and unassuming with regards to her unusual and at times unexpected life story. 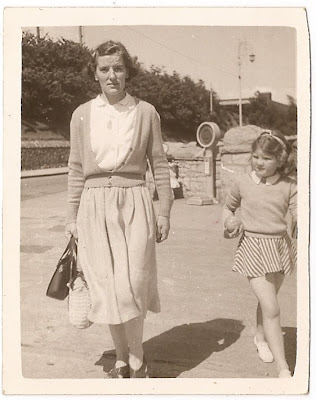 mum and grandma peppermint on holiday
Susan Joy Broadhurst came into the world in 1943. It is still a family mystery that she was born in Croydon as my Grandma Peppermint had no links there but we can sadly assume that Grandma Peppermint had travelled to unfamiliar and unknown territory to give birth to avoid the shame of bringing a baby into the world without a husband by her side. Another unusual detail for that time was that Grandma Peppermint was thirty six years old when she had my mother, not only was she an 'older' mother but she was a single parent too. It wasn't long before she returned to Birmingham bringing with her Susan, whom she named after a nurse in the hospital that she delivered in that was caring for them and also naming her 'Joy' to reflect her feelings and expectations of this little bundle. 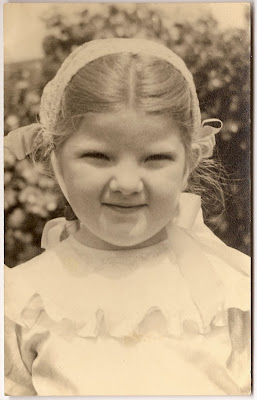 She quickly set about finding work to support herself and her new daughter and worked from that point and for many years as a housekeeper mainly in the Solihull area, working for affluent employers on Lady Byron Lane and the Warwick Road to mention a couple. Grandma Peppermint was fortunate to have good employers over those years, bringing mum up in the servant quarters of these fabulous and opulent houses, often the very houses that you would not expect to hear the working sounds of a young child and yet mum was always at Grandma Peppermint's knee or nearby whilst Gran toiled away, a blessing considering the attitudes at that time. 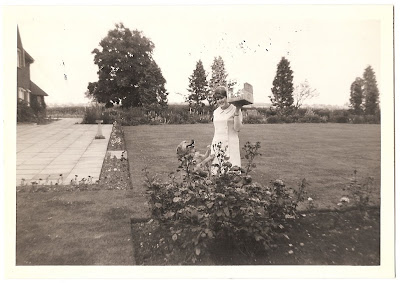 mum at the lady byron lane house
She attended a secondary modern school and in her fourth year she was selected by her teachers to take exams in Art, French and Domestic Science. This selection, for her was the first indication that she showed any skill or talent in these subjects and it is significant because it was a trigger that lead to a love of art and drawing that remained well beyond those teenage years with her gaining particular enjoyment drawing from nature and wildlife (something that would go on to inspire me in years to come). 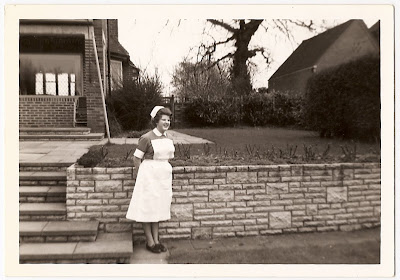 mum at the lady byron lane house posing in new uniform for grandma peppermint
At around the same time that she discovered her Artistic talent, she gained a work experience placement at Solihull Hospital working in the medical records department. It was during this placement that she developed an interest in nursing and made a decision to begin pre nursing school when she was sixteen and a half years old. She went on to begin her nursing training aged eighteen qualifying in 1965 at sweet twenty one and to top it off, she became a Ward Sister at just 23 years of age, an outstanding accomplishment even for the time! Whilst working as a Ward Sister at Dudley Road Hospital, Birmingham on the Trauma Ward she met my dad who at the time was working as a House Officer. I have always loved the story of their meeting because it reads like a chapter straight out of a Mills & Boon novel! 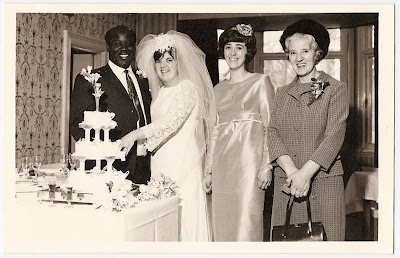 mum, dad, mum's bridesmaid and grandma peppermint 1967
They were married within a year of their meeting, the special occasion taking place at St.Martins church situated in the centre of Birmingham. Interracial marriages were not common at this time by any stretch of the imagination but any issues of difference they took in their stride and 'just got on with it' as mum still often says about anything that is less than straight forward! 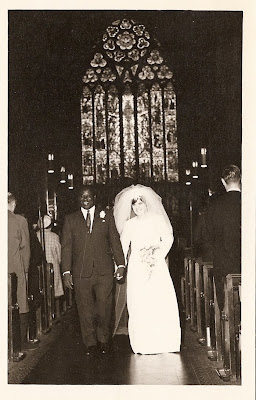 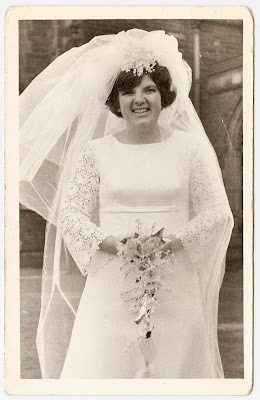 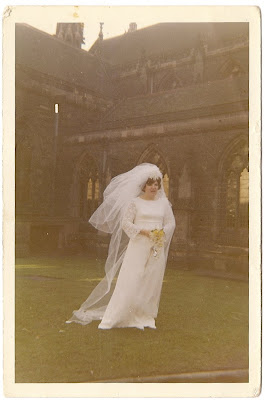 I love this photo, she looks beautiful and elegant!
Little did she know at the time but Grandma Peppermint was soon to find out not only had this 'big, black guy with really white teeth - the doctor' (as he was so often described!) married her only child, now he planned to whisk her off to Ghana, West Africa for .... a few years at least!! Poor Grandma Peppermint, I've always had a lump in my throat at the thought of that farewell between mother and daughter but now as a mother myself my heart wrenches to new depths. 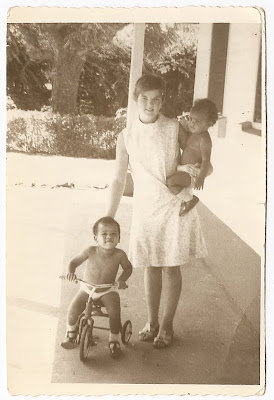 peter, mum and debbie 1970 Accra
Mum is pictured here with my brother Peter (the eldest) and my sister Deborah (second born). They were living in a staff bungalow in the grounds of Korle-Bu Hospital in Accra, the capital of Ghana where my dad was working as a General Surgeon. It's significant to remember that these were times in which white faces and certainly white women's faces were not a common occurrence. Mum often mentions that she can still hear the ring of the local children singing songs about 'blofonyo - white people' whilst persistently following her wherever she went. She handled these things with grace some of the time and with humour when grace failed, pulling contorted faces and unexpectedly turning round and startling the hordes of children, 'I'll get 'em' I can hear her say!!! 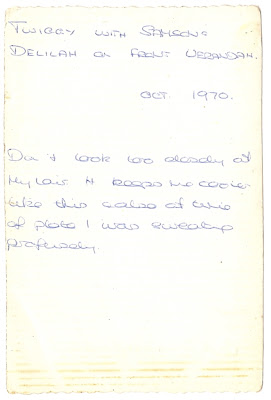 I was really delighted to see that mum had written on a couple of the photos that I am including, she is famous for her illegible writing and so for those of you who can't make it out it reads as follows:
Twiggy with Samson & Delilah on front verandah
Oct 1970
Don't look too closely at my hair. It keeps me cooler like this & also at time of photo I was sweating profusely.
This is a great example of my mum's wonderful sense of humour and of the relationship that she shared with Grandma Peppermint. In all the years to follow that they would be apart they never stopped exchanging letters, delighting each other with their quips and foibles. I feel so priviledged to be able to do the same with mum today but if I'm revealing warts and all, even when mum drives me mad fussing me with 'when are you going to sit down and relax' or 'what are you going to have for your lunch' I LOVE the fact that when I shoot her 'THE LOOK' she never takes offence and she lets me get away with the rudeness and I see her uttering internally 'shut up mother, let her get on with it'. Thank you mum for these little things and so much more! 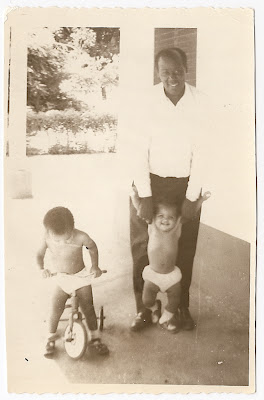 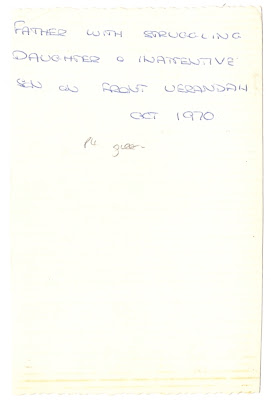 The writing on the back of this photo reads:
Father with struggling daughter & inattentive son on front verandah.
Oct 1970
They spent nearly two years living in Ghana and once my dad's itch for home was satisfied and he'd shown his white girl off, it was back to England for more babies and more adventures. Here's a sneek preview of the next installment, it's a picture of a newborn me with the rest of my siblings and of course mum taken in our house in Edgware, Middlesex in 1975. There is still so much more of mum's story to tell. Watch this space. 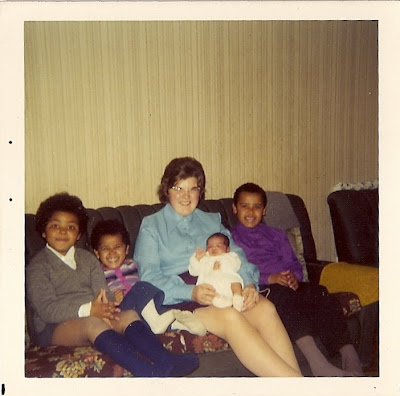 Posted by Katy Acquaye-Tonge at 02:29