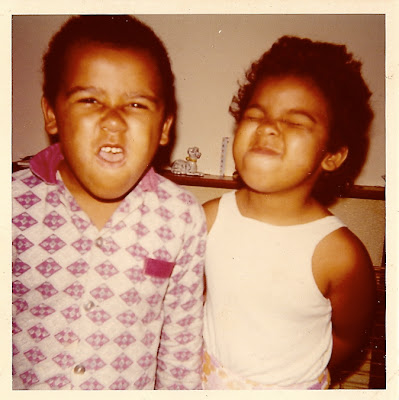 Yesterday was my brother's birthday. He turned 43. I know this because I am seven years younger and always will be. This is a comfort as it is one of the few things in my brother's and my relationship that will remain the same. I no longer have contact with my brother, we are estranged. He made the decision many years ago that he did not want to continue having contact with either myself or any of my family members. This is a strange and hard fact and one that I am often uncomfortable and ashamed to admit, it's just all a bit too .... soap opera for my liking but hey, some of that stuff 'actually' happens in real life!
I still love my big brother. I can't help it! I still want to shout out at the top of my voice and tell the world stuff about my big brother, just like I always did when I was his little sister. I want people to know the perhaps unexpected things about him, like how he was a great draughtsman and spent hours drawing tropical birds when we were children. That he achieved a Grade A for Bible Knowledge at school, that he was a strong swimmer, had a phobia of snakes and that it was in fact he and not I, that ate Debbie's entire tin of cerelac in the summer of 1983!
No matter what has happened in these latter years, be it troubled times before the estrangement or the troubled times experienced because of the estrangement, he still remains the one who came to be my memory keeper. The one who loved to tell me 'remember whens', some good some not so good ... 'remember when you couldn't say 'idiot' and you kept calling me 'idinot'' and yes it was he who taught me the word itself. 'Remember when I convinced you to throw your shawly (my comfort blanket that I wasn't without for the first four years of my life) into the sea and we watched the tide carry it away?' he would say. Or 'remember when you swore at the table at Aunty Mary Berko's house and really embarassed everyone?'. 'Or the time that you hid behind the settee and cried when you knew I was going back to boarding school and wouldn't see you for months'.
He still remains the one who taught me about humour and about how to laugh, I mean really laugh. There is no laughter quite like the sort that comes out of completing a successful prank on a sibling (you know the kind of old school Tom Sawyer prank!). My brother and I enjoyed playing many a prank on one another. From small jugs of water balanced on tops of doors, hiding in small spaces for long periods, just waiting to pounce (our sport often took real discipline!) to throwing heavy leather pouffes when the other person was least expecting it. This, by the way, works particularly well if you have a brother who weight trains and has done 'legs' on said day, a) he cannot chase you as he is already in too much pain b) just the anticipation of the pouffe being dropped causes the body, legs muscles included, to contract causing discomfort. Brilliant!!!
One of my favourite pranks of all time came out of my big brother's habit of drinking my coke without asking and then mocking me as I opened the fridge door with a rather disappointed look on my face immediately after discovering it was no longer there. My revenge after many times of this taking place was as follows:
I took an empty coke bottle and filled it with gravy browning, bicarbonate of soda and sparkling water and voila - you then have something resembling coke that has quite a different flavour! Only make enough mixture to fill a small glass, this has a greater impact as greedy brothers knock it back quickly!!!! My brother, just back from the gym did everything as predicted, straight to the fridge to check out what was in there, glug glug followed by uuuurrrgggghhh, whilst I sat quietly laughing into a cushion. Of course, he was ANGRY, he had quite a temper but with our pranks he would always come round and would give credit and praise where it was due and after all I had performed a great prank!!!
When something made my brother laugh, it would always make him laugh and so laugh he would often at this prank I had played and I would feel a cosy 'he's my big brother and he's proud of me' kind of feeling as I would watch him laughing his deep, energetic belly laugh, shaking his head from side to side just like my Dad used to. So big brother, whether you like it or not I am shouting at the top of my voice and I'm telling the world that 'Kate-Anne' still loves you. If I'm honest, sometimes when I'm missing you I still want to hide behind the settee and cry .....
N.B Please note photo of me by a palm tree desperately trying to imitate my big bro's earlier pose. He was kind enough to give me a hand! 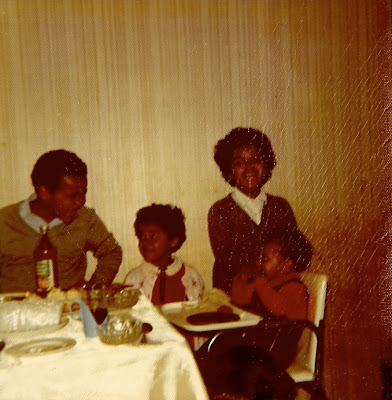 Me in the highchair staring adoringly at my funny big bro! 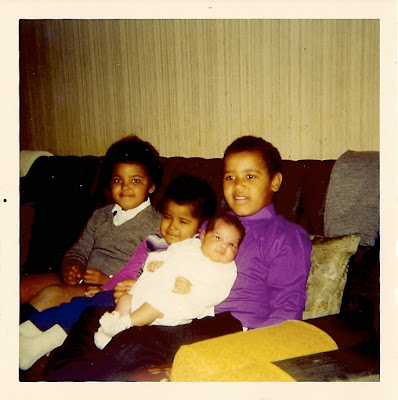 Me in big bro's arms 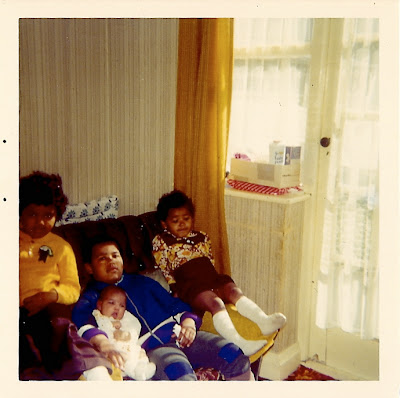 Laid back big brother taking me under his wing 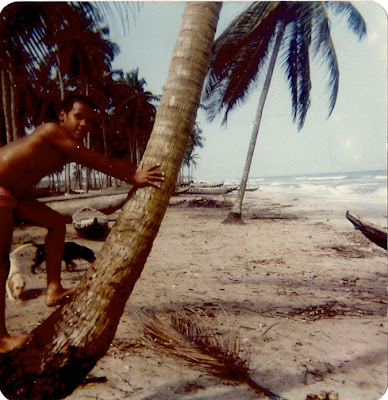 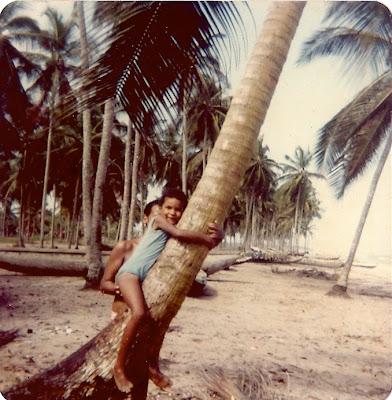 A little help from my friend
Posted by Katy Acquaye-Tonge at 05:24