Today is my dad's birthday, Prince's too. 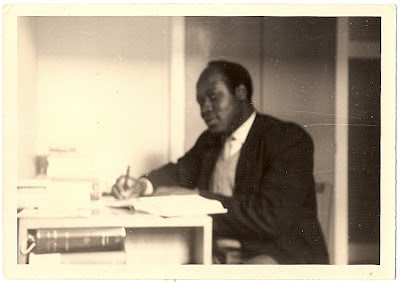 Today is my dad's birthday, he would have been 80 although I don't know if that counts since he died twenty seven years ago. It is also Prince's birthday today and the irony has not passed me by that today Prince turns 54, almost the same age my dad was when he passed away, he was 53. I love Prince. When I was a teenager, as soon as I woke up I'd put some Prince on vinyl on my turntable. The discovery of his music coincided with a strong inner desire to respond to a calling and listening to Prince describing a spiritual life that I could relate to was utterly mind blowing. Growing up without my father and without many black  relatives or friends whilst living in a place that demographically ignored pretty much anyone that wasn't white, a place where I was often referred to as 'coloured' and where some wondered why I  raised an eyebrow or the occasional fist in response, it became very important to identify people and genre's that gave me a true and rounded sense of my mixed identity. Prince was the perfect tool for this because he crossed over all of the typical boundaries around sexuality, race and gender. In short, if you were into Prince around the parts I grew up, it was a good way of quickly identifying like minded folk, the sorts that weren't racist or homophobic or likely to ask if my white mother had adopted me. Listening to Prince stirs lots of memories of my teens and late teens, lots of angst about identity and displacement, lots of cherished memories about identification and kinship. So today on my dad's birthday here's a little Shirley Bassey because it's one of the sorts of songs I remember him listening to. I'll let you in on a secret too, I spent quite a bit of time worrying that my Daddy would run off with Shirley Bassey because I'd heard him telling my mum how much he liked her voice and I remember my mum not looking suitably impressed! Happy Birthday dad, Happy Birthday Prince!