I often think about inviting favorite bloggers of mine to write a guest post here but I have never actually got around to it. I love reading and hearing from the kind of people that have a great work ethic, people that are focused, self driven, creative, inspirational and ambitious. The types that always have fresh ideas, that are great collaborators and have a very real understanding of what it is to be a part of a sharing and caring creative community. So with this in my mind, I approached Stuart Tonge from First Fold Records to write a guest post here. Oh and he just happens to be my ridiculously talented hubby! 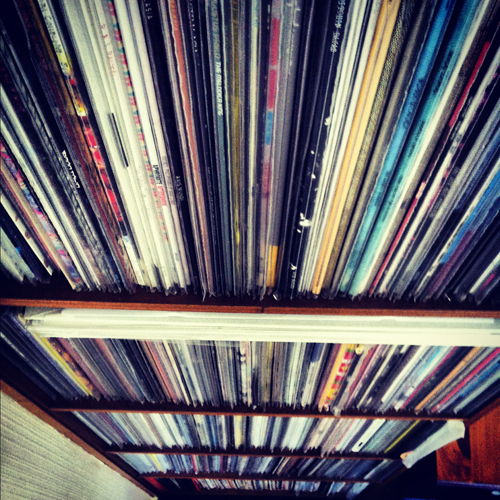 My Dad is a charismatic and interesting man, I have nothing but the utmost respect for him and to this day his opinions and musings have my full attention. Growing up with such a strong personality was great, partly because I never felt anything other than totally safe and secure when he was around and also because strong, interesting people are friends with other people with similar character traits, it made for a varied and very happy childhood. When I was thirteen one of my dad's friends, a chap called José, came to our house in the town of Alcalá de Henares in central Spain. José brought an unlabelled cardboard box and went through to our dining room, after a few minutes he asked my older brother and I to go through to the room. He had placed on the dining table the contents of the box, twenty or so cassettes from his music collection.
José pointed at the table 'Here is a selection of my favourite music, I have separated the cassettes into two groups. On this side we have rock, it is exciting and noisy' He then moved to the other side of the table 'On this side we have electronic music, a lot of it is calm, some of it might look boring but electronic music will change, it will progress, rock music has reached it's peak'.
José was very deliberate in his presentation, I was very aware of this, even as a distracted teenager with a very short attention span. He had totally got me, I felt the event was some sort of unbelievably cool test and José had sold electronic music to me, totally and utterly. I chose Equinox by Jean Michel Jarre, a few months later I heard Oxygene by Jarre on a pair of headphones, that experience closed the deal, I have had a deep connection with electronic music ever since.
José went on to explain what was to happen next, a choice 'I want you to have one cassette each from the music on the table, think about your choices carefully, take as long as you want'

I would like to thank Kate for inviting me to contribute a post, I could have written about my mom's love of the Great Russian Epic, or about visits to the Prado Museum in Madrid or about falling in love with Goya's dark period. If this cool lady asks me again I will bore you with something else.

Posted by Katy Acquaye-Tonge at 13:21