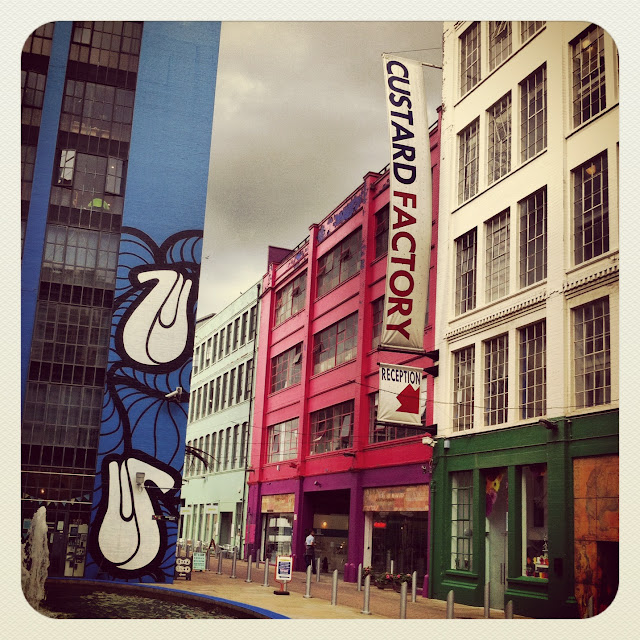 During these recent summer days and weeks my family and I have been existing simply. Our days consist of unrushed starts, sometimes unusual breakfast treats (american pancakes are our current favourite) followed by making delicious home made sandwiches and then scooters and bikes are packed into the car, hubby (our designated driver) selects his music of choice (current favourites are Beastie Boys, Neil Young, LCD Soundsytem ... can't think what the other seven odd cd's are in the glove compartment, this will be of much disappointment to my hubby and children!) and then we're off in search of fresh air adventure normally in the form of local parks and woodland. On most days we have established a family tradition of one member of the family selecting an activity for the whole family to carry out for that day. The photographs added here show Zach's choice: a visit to the Custard Factory in Digbeth, again a particular favorite of his at this time. Hubby had taken the boys there on his own a couple of times recently whilst I had some alone time and so Zach was very keen for me to share in their good time experiences of the Custard Factory. Actually, when Zach came home one day excitedly telling me about his adventure at the Custard Factory, I began telling him that hubby and I had ended up at there on our first date - he paused and looked right into my eyes raising an eyebrow and then uttered: 'Wow, the Custard Factory was open even that long ago ...!'

Zach led me all around the premises and was particularly keen to show me the music shop that he had visited previously where his dad had bought a Cajon. Zach is very much in love the Cajon at the moment too, he seems a bit of a natural ... said the proud mother! There's a little magic in the history of the cajon and the idea of my boy being drawn to it and its history makes my heart swell with pride. I think of the Cajon as the equivalent in instrument form of my hubby's and my own mixed race identities. The fusion of afro spanish influences and experiences, me growing up in Ghana and my hubby's roots in Spanish culture having grown up in Spain. That said, I do not play an instrument and so whilst I looked around the exotic and splendid instruments in store I felt somewhat redundant until I spied something with my little eye - a kazoo! Now a kazoo, I can do!!

I was bought my first kazoo when I was around 20 years of age by my slightly eccentric mother-in-law, a real kazoo enthusiast. I have great memories of watching her play her own kazoo on the same visit where she presented me with my own. I had no idea at the time that she had a long standing relationship with the kazoo until very recently when hubby borrowed some cassette tapes of recordings that they had made as a family to send home to relatives, when they were living in Spain (when he was a child). On one of these cassette recordings my mother-in-law performs a brilliant twenty minute solo on the kazoo which hubby featured in one of his own recordings recently - beautiful no?

So on this great day of adventure after discovering the kazoo's I asked each member of my family to select a kazoo and I purchased four kazoo's at the bargain price of £1.50 and we proceeded to be the most annoying family of four in Birmingham city centre. That walk from Digbeth to the centre of town will forever be imprinted in my memory, there were four part harmonies I can tell you! I have seen families like this before and have been perhaps a little scornful when I have observed them ... well, that's me and mine now! Oh and I forgot to mention, my kazoo is silver - she is beautiful!

There was time to take a look around vintage stores, furniture, knick knacks, clothing, a fifties boutique. There was even time for a little outdoor table tennis although I got a bit worried about having to constantly retrieve ping pong balls from large volumes of water whilst balancing precariously on one knee with the three men in my life laughing and I suspect hankering for me to fall into large volumes of water - all because I'm a little bit better than them all at table tennis! Our bellies were filled by the lovely and fresh food at 'Yumm' who had come with a great recommendation from Zach who was particularly impressed with their fish finger sandwich. He was a greatly disappointed that it was not on their specials board on this particular visit, however I was blown away by their freshly made coleslaw - delicious!

A great time was had by us all on this day, many many thanks to that boy of mine for his great idea and more importantly for his great enthusiasm and appreciation for both the big and the little things. 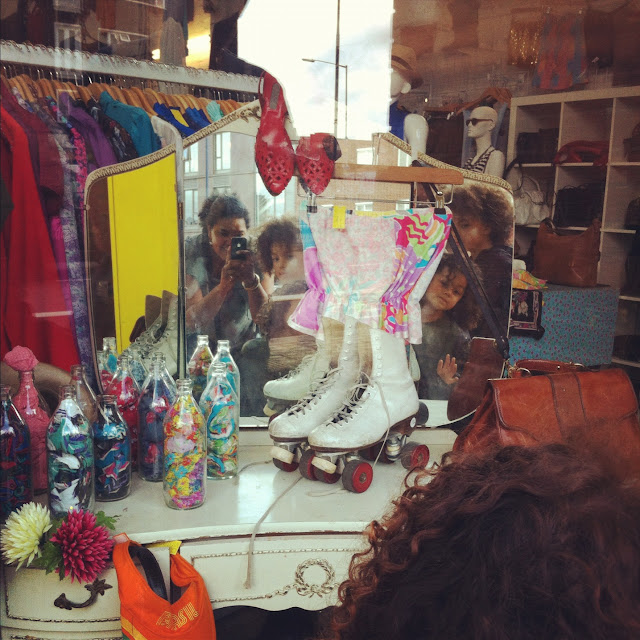 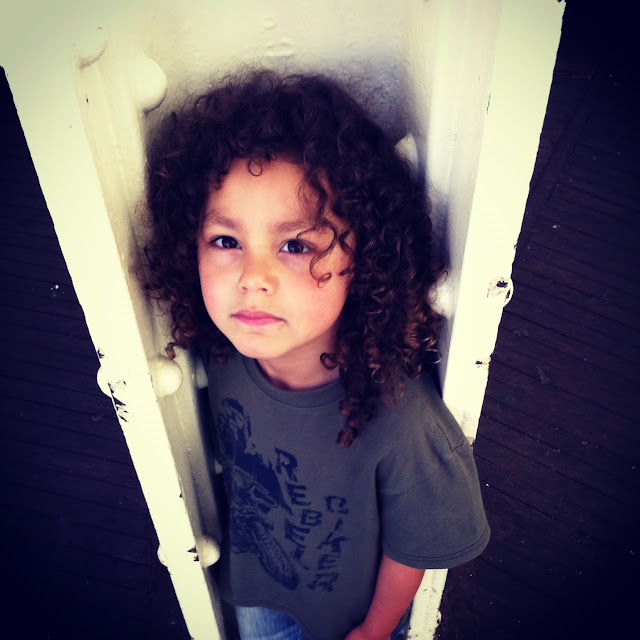 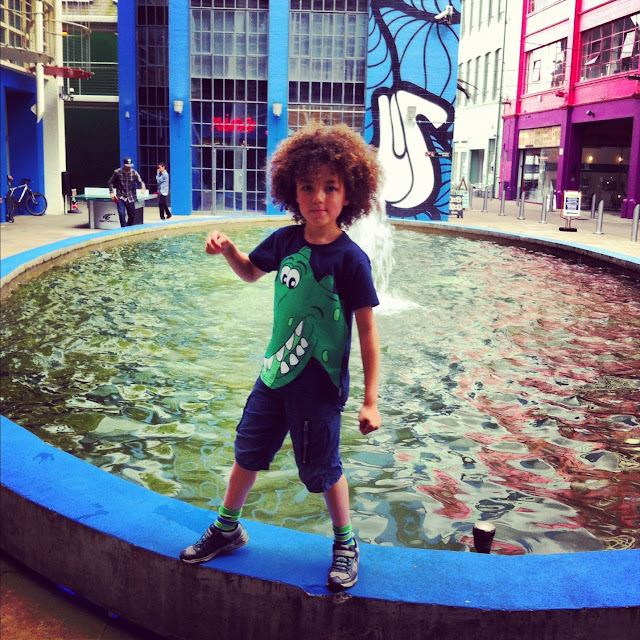 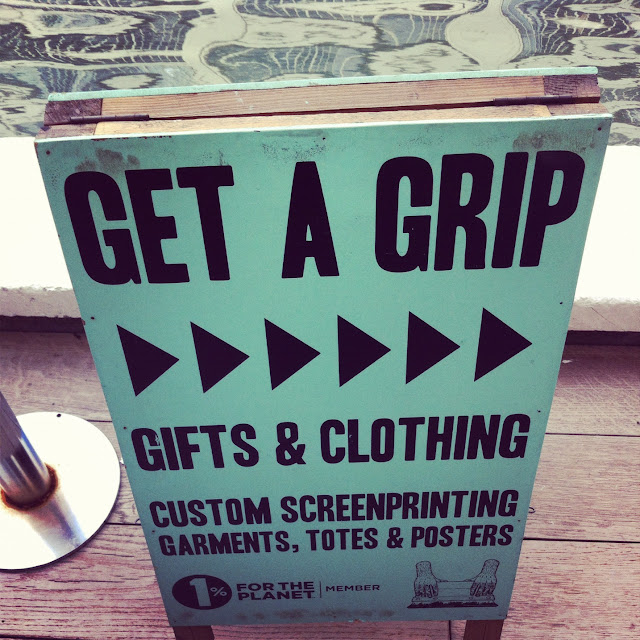 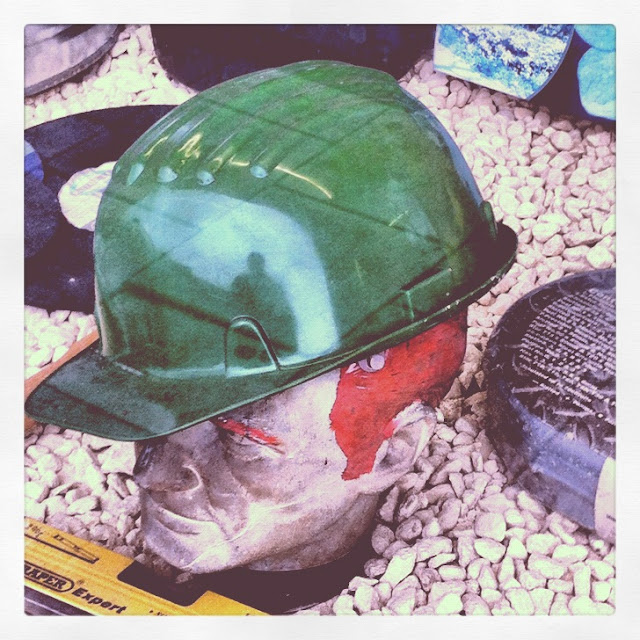 Posted by Katy Acquaye-Tonge at 14:52