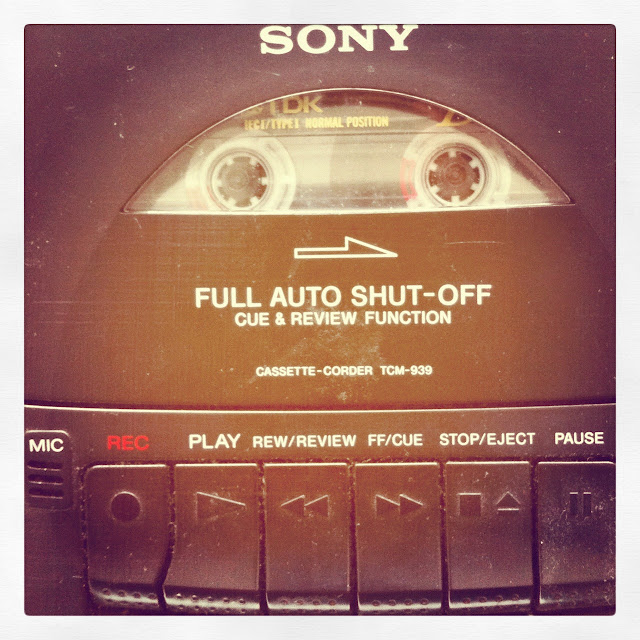 I have long been interested in documentation, oral histories and cultural traditions relating to the relaying of family history and so it's something that I long to log in a variety of ways for my own children. The mobile phone and in particular the iphone (for me personally) have revolutionized the very immediate way in which we can capture our lives moment to moment and with the likes of facebook and instagram, we can share those with millions potentially. Alongside the mobile phone staple, I really enjoy taking audio recordings. I still use both my cassette recorder and my mini disc recorder to record, usually of things like my boys talking, roleplaying, singing etc particularly if I am able to record them without them knowing. This is something I spent hours doing from around age 11 when I began using my portable tape recorder to record my family members in secret. I would tuck the recorder behind the settee, behind doors, behind plants, under cushions etc trying to capture my family going about their daily business. It was these recordings that I worked from when I first began making sound pieces and sound installations during my Fine Art degree, also many years ago now.

Looking back I realize that I have continually documented using sound. I have purposefully collected peoples stories throughout my life. When I was a teenager I visited my Grandmother most week-ends and I spent a lot of time asking questions about her life, wanting to know details about her that seemed trivial to others but fascinating to me. I wanted to know all of the places that she'd ever lived, where she rode her bike, how she learned to cook, if she had always had so many pretty hand made aprons, why she had been made to have elocution lessons. All of her answers however informative or vague, defined this greater picture, this greater story of who she was and is still today, in my mind and in the stories that I now tell about her. It is a comfort to me to know that when I think I can't remember the sound of Grandma Peppermint's distinctive voice, I know that amongst my many tapes I have recordings of me interviewing her about different topics and periods in her life.

I feel the same comfort and exhilaration knowing that I still have hours and hours of recordings that my hubby and I took on our pre-children trip back to Ghana, recordings that I still have many plans for. One of the last sound pieces that I created was titled 'Journey from Mamprobi to James Town, Accra 2002'. It featured my sweet Aunty Adelaide singing in the car on a journey we took together. Alongside her singing voice, you hear the hustle and bustle of traffic and horns, that great 'whoosh' sound of cars passing by an open window at speed, hawkers shouting prices of their products on offer. It is these sounds that transport me right back there in a way that a photograph does not. I'm immediately back where I can feel the heat of the black leather seats in the car and my right arm burning in the sun, I can taste the plantain chips that we bought from a hawker, I can picture myself dropping a plantain chip in the footwell and noticing for the first time a small hole in the rusted metal of the car that meant you could see the road when the car was static. This is sound working its magic! In my explorations of sound there is always that same interest, the same desire - to give others a chance to feel the heat of the black leather seats in the car as it were, for them to be transported into that world, even if it is for a short time. I have for a long time loved the idea of piecing together narrative in this way and of taking sounds and narrative relevant to one context into another context.

At the moment the boys and I are enjoying telling the exciting adventures of Master Bobbi! I have no real idea about the origins of Master Bobbi, I've tried googling to no avail but in my memory it was the creation of members of my village in Agege in Ghana where I grew up. Master Bobbi was a character not unlike the popular west african character Anansi the spider except in this case I had no idea at all that Master Bobbi was the work of fiction! To me he was a teenager, a young man who was always up to no good through no real fault of his own because he was driven by the great calling of mischief. It was actually my czechislovakian Aunty, Aunty Gita (an aunty through marriage who had married Uncle Joe, my dad's second cousin or something like that!) who really embedded the great stories of Master Bobbi. Many years passed before I found out that it was in fact Aunty Gita who had been taking great bites out of unripened mangoes, leaving these crime scenes for us children (my siblings and my cousins) to discover and which lead to hours and hours of plans to try and catch Master Bobbi in the act of trespassing on our properties and stealing from our compound! Oh how we would teach him a lesson! (said in a necessary African accent whilst wagging a finger of disappointment in front of another persons face).

It fills me with great delight and pride that my boys beg me for stories about Master Bobbi every night, that they know what follows as soon as I bellow 'ONCE UPON A TIME ...' in my African accent, that they know to pause and then shout back 'A TIME', just like I used to as a child in Ghana. It warms my heart that this has been a fun and easy way to work in stories about my father and his homeland, about my childhood, about walking on hot sand, about lizards and gekkos and cockroaches, about foods that they don't see or eat everyday. It pleases me that they seem to cherish these things nearly as much as I do, that they make up their own stories about a place they have never visited and correct me! Ok, so now according to my boys tales, Master Bobbi's greatest mischief normally involves farting or pooing somewhere he shouldn't but so far he is still in Africa, he's still eating mangoes and climbing coconut trees to escape and the boys definitely have not introduced Master Bobbi to dvds, the internet  or ds games, so it's all very old school and simple and imaginative and lovely. The many stories of Master Bobbi have been told in schools across the Midlands that I have worked in,  where he has been transported to Pakistan, Yemen, Somalia, Iran, Poland and Ireland to name a few. I love how adapatable Master Bobbi is, he is so easy to get along with, so international, I've never met a child that doesn't want to claim him as their own, but hey, everyone loves a rogue! So, perhaps it's time to write that book on oral histories, it would definitely include recordings  and I think I'd just have to make them available on cassette, of course!

Posted by Katy Acquaye-Tonge at 12:29