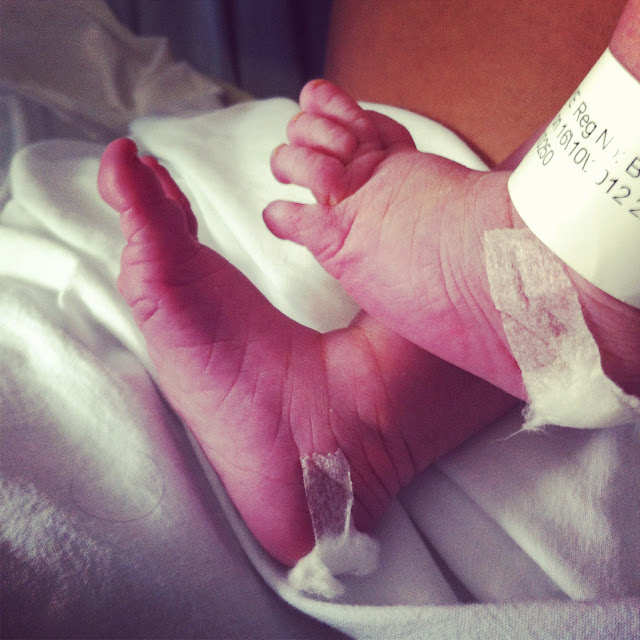 I have a confession, I have no nails left on either hand such has been the frenzy of the last twenty four hours! I mentioned in my last post that the nail biting had begun as I expectantly waited to be made an Aunty once more by my big sis and her fella. My new nephew was born late last night and his name is Paddy! Isn't that just the best name? I am so thankful for his safe arrival and thankful indeed for my hubby, mother-in-law and sister-in-law who were my fellow prayer warriors during Paddy's labour. I believe our prayers protected each and every one of those tiny hairs on his head and believe me there are plenty of hairs, you know the family history!
My big sis a 'Mama' - I've thought and dreamt of this day so many times before ever since I was a little girl. Seeing her so content with her little bundle today I couldn't imagine that life had ever been any different. When we were kids and moved to Ghana this big sis of mine had to leave behind a piano, the piano that she was learning to play. She would often talk about how much she missed having that piano and I remember so clearly wanting to to be able to get her back that piano, not just any one but 'that one'. When she explained, with the wisdom that comes from being six years my senior, that it was unlikely that I would ever find 'that one' again, I remember telling her a number of times that when I grew up I was going to buy her a new piano. In fact one of the times that I told her this was when I was standing by Dad's car waiting to say goodbye to her and my brother as they were heading off to boarding school for the term. I told her about the piano and then I remember sobbing and wiping my tears on her 'going away' dress and her giving me a cuddle. I mention this now because it is what I was thinking about in the early hours of this morning when I was buzzing with relief at the news of Paddy's arrival. I mention it too because all I could think when I saw that beautiful boy in her arms today was ... she really doesn't need that piano anymore. A part of me still wanted to weep that weep of relief into my big sisters dress, a part of me still had to take a deep breath as I waved goodbye trusting that everything was going to be just fine.

Posted by Katy Acquaye-Tonge at 14:43