When I was a young girl there was a couple that I was fascinated with, Aunty Perpetua and Uncle Peter. They were friends of my dad's originally and then became family friends and so they were not blood relatives. Once we moved to Ghana when I was four, as far as I know we lost touch with them but I always remember looking time and time again at a few pictures we had of them on their wedding day which we had in a family album. I don't recall if I asked my parents questions about Aunty Perpetua and Uncle Peter but I do remember wondering if anyone was ever going to mention the fact that Aunty Perpetua had married ... wait for it ... a white man! Did she realise I asked myself quietly? I just wasn't sure what the rules were about that kind of thing or how it even happened. I knew that my parents had met at a hospital where they were both working, nurse alongside doctor amidst romance. I also knew that my parents stood out at times and that lots of people had to get used to the idea of them being a couple but they were my parents so these things still felt normal. In Ghana my parents knew three other couples who were mixed couples where the man was black and the woman white. This certainly wasn't common place but more common place than the Aunty Perpetua/Uncle Peter combination, in my eyes at least.
For many years I would unconsciously pull out that family photo album and look at the pictures of Aunty Perpetua and Uncle Peter, still with this curiosity and fascination much like the one I had when I discovered a black woman smoking in a public place. I had overheard some grown ups nearby talking about 'those kind of women' and had wondered what that had meant. Again I remember thinking, so what are the rules about black women smoking? If they could smoke, could 'those women' also marry white men? It was very confusing, especially because my own mother was white and had married a black man and she also smoked cigarettes and even though her smoking made my dad cross, she still did it as often as she could!
At age 20 and 21 my boyfriend and I decided to get married after a year together but geographically apart much of the time. I didn't know anyone from my peer group that had been married or was even planning marriage and so making decisions about the ceremony, the dress, the vows and all those weddingy details was neither familiar or of particular interest. But there was one familiar image that kept coming to mind in those eight weeks leading up to getting married, the image of Aunty Perpetua and Uncle Peter on their wedding day. A number of people asked me then and still ask me now, how I decided on what to wear on my wedding day. Well, it was easy! I owned one dress and I asked a friend from church with sewing skills to replicate it in cream and then I dug out that familiar family album and found the picture of my black aunty with her white husband and told my mother that I wanted to look 'kind of like Aunty Perpetua' which is how I decided on a plain head wrap. My hubby and I still often talk about this couple, this picture of them on their special day, these role models of ours who we do not know or socialise with or even see and yet who have had such an impact on my life and now our life together. I was reminded of Aunty Perpetua and Uncle Peter once more recently when hubby and I watched 'A Bronx Tale' for the first time. Regardless of the fact that I am a huge fan of gangster movies, a huge fan of biopic movies, a huge fan of Robert De Niro, what blew me away most was the depiction of a young black woman and a young italian man, a 'mixed' couple, falling in love amidst all the stuff good and bad, simple and complex that runs alongside mixed relationships. Just the other day my littlest one pointed at the tv and said 'she's like you and he's like daddy' referring to a couple on screen, he looked slightly bemused for a second and I wondered ... am I his Aunty Perpetua or someone else's? 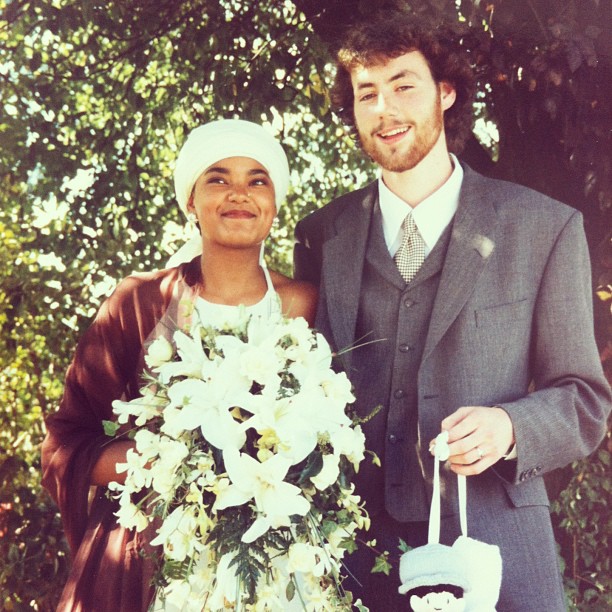 Posted by Katy Acquaye-Tonge at 08:19