Will you cry if I die? 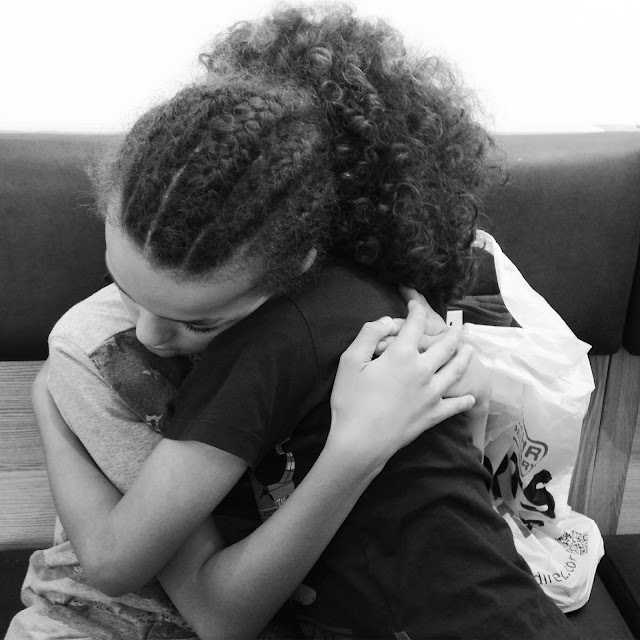 When I was a little girl, at night when we were falling asleep, I would often to say to my sister three years older than I, 'would you cry if I died?' She would get really annoyed with me and refuse to answer my question and I would try and find different ways to ask the same question, hoping to trick her into an answer. Knowing that we were close, I simply wanted confirmation that she felt the same level of affection for me that I felt for her. I think it came from knowing even at that young age that we all experience loss differently. I wanted my sister to cry many tears if I were to die that night or the following day but I knew that she might not show her sadness that way. She was more likely to shut herself away and immerse herself in a really thick novel, her means of escape. I was thinking about this a few weeks ago when I overheard several conversations between my two boys, who just like my sister and I are three years apart in age. I heard them exchanging 'I love you's' a few nights in a row and I have been struck by the ease at which these words spilled from their lips.

A few weeks back my eldest boy went away on his first school residential trip, four nights away in Wales at the infamous Redridge. As the days grew closer to his departure, the younger brother said to his elder brother 'I'm going to miss you when you go away'. The elder  brother responded with a tender smile and reassured the younger one with words like 'I'll be back before you know it!' and 'but you get our room to yourself for 5 days!' The younger boy then looked his brother straight in the eyes and quietly and slowly said: 'I'll really miss you' and then they embraced. My youngest boy was really quite lost without his shadow nearby. it took him some time to adjust to being the only child in the house. We found ourselves talking about our missing family member all of the time, recollecting favourite stories and happy times shared with him.One night he chose to sleep in the top bunk, in his brother's bed but by morning I found him back in his own bed. At breakfast he told me 'it just didn't feel right!'. Another night, my husband and I took him out to dinner to try and take the edge off the sting of missing his brother. Fried chicken did the trick, although even then he pointed out which bits would be his brother's favourite. It's the crispy bits by the way.

Reunited! their embrace was like a Hollywood film, just perfect. I was almost a little jelous. I got a hug but only after little brother. Five days away, canoeing, kayaking, rock climbing, abseiling, mountain biking, archery, caving, paddle boarding, orienteering, night walks and he loved it all! And, he kept his clean and dirty clothes separate! I am so proud of my boy. When he stepped off the coach and his dad went to meet him, apparently husband nearly walked past him as he didn't recognise the tall kid with cornrows. Then, finally, that smile. That smile. I'm sure, like every other parent there to collect their child, that space in your heart with a shape that's a perfect match for your children's smile, slotted into place like a jigsaw puzzle and all was well again.

Sometimes, it's only when the journey is over that you realise the magic of the build up to it. I loved watching our friend Sadie braiding Zach's hair, I loved hearing them chatting so easily, exchanging excited thoughts and comments as they watched Jason and the Argonauts. I was so excited that he enjoyed the ritual of having his hair braided. It felt like an important initiation. Many, many times, I have told him stories of having my hair braided as a child. The pleasure and pain of it, the comfort of feeling strong knees either side of you, usually your cousin's or Aunt's and the pain of having your fro combed through. Of course, it took me back to my childhood, to those days spent kicking dust in the air. Right now, my younger one is having a bit of a hard time with friendships and communicating and making himself understood. Not an uncommon thing for dyslexics. Watching him struggling to navigate, as a mother makes my heart bleed. His father tells me, he'll be just fine. I know it to be true but still it stirred me in the night last night. All I want  is to see those boys endlessly, effortlessly, kicking dust in the air. Making noise, sweet to taste. Kicking dust in the air, making noise, sweet to taste. Sweet to taste. I want it all to be sweet to taste. 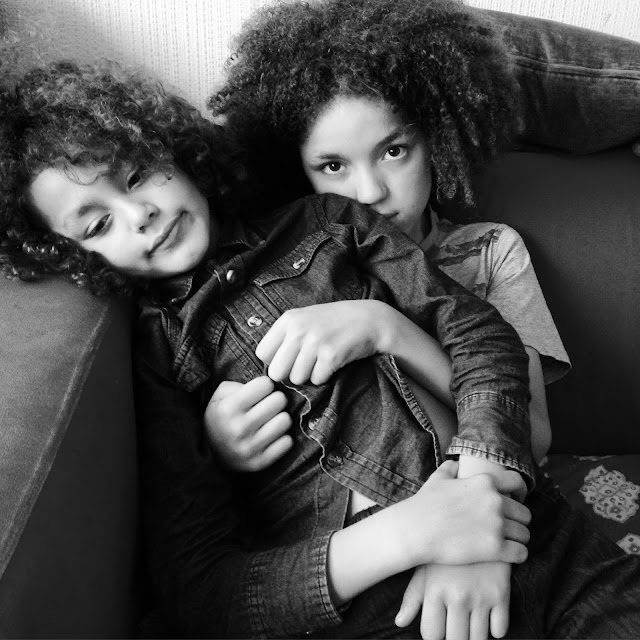 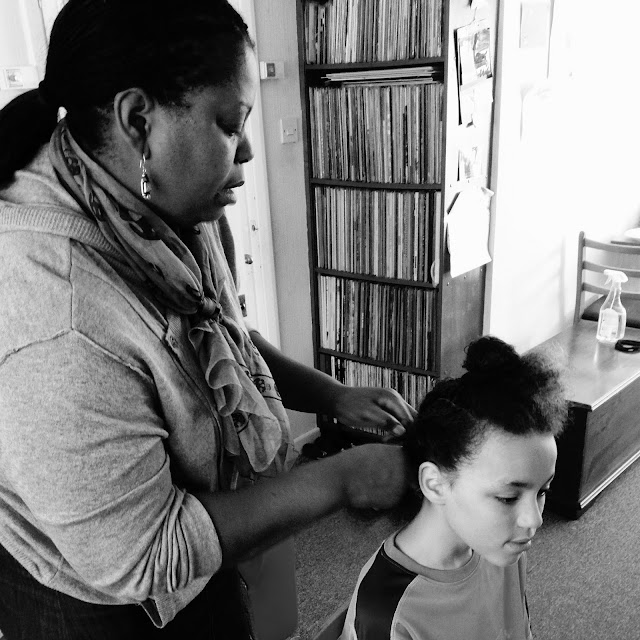 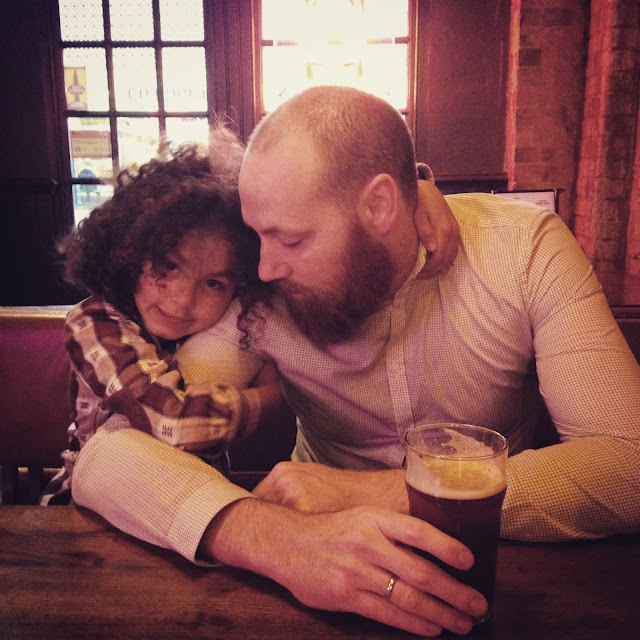 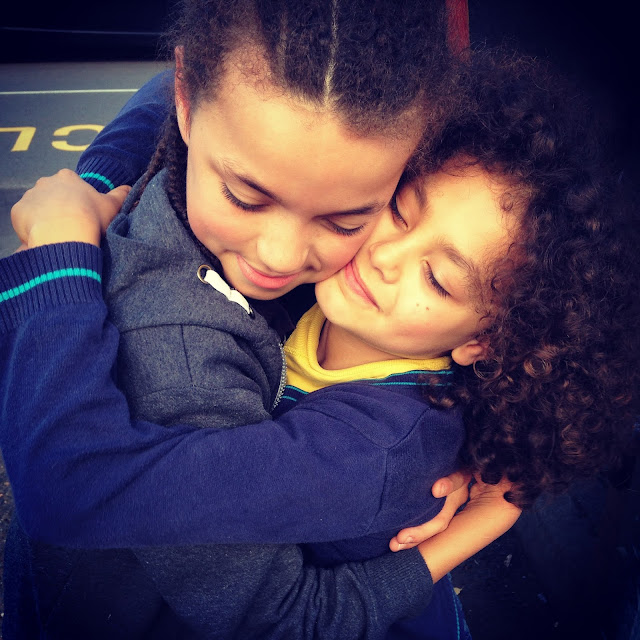 Posted by Katy Acquaye-Tonge at 04:04

Email ThisBlogThis!Share to TwitterShare to FacebookShare to Pinterest
Labels: growing pains, growing up, relationships, sibling love, siblings, will you cry if I die