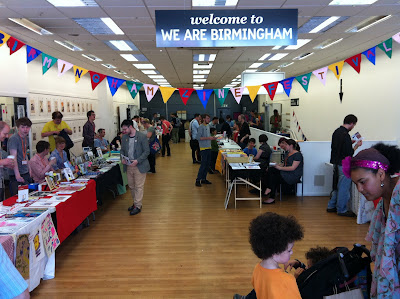 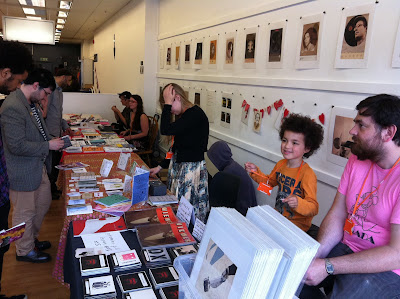 Zach & Ben Sadler man the First Fold Stall - Note Gareth Courage Work in Background
I think about Bizarro World a lot, too much sometimes. Hubby and I are big Seinfeld fans and in particular over the last few years since having children = less nights out and more nights in, Elaine, Jerry, Kramer and George have become extended members of our family. Attending the Birmingham Zine Festival this week-end felt a little like Bizarro World. To start off, the much anticipated launch of premier pli was understated somewhat due to late delivery of the magazines which meant there were none available at the festival! This, after everyone's spectacular effort - Bizarro World!
One of the first people I saw when I walked into the We are Birmingham store was Bunny Bissoux. I have mentioned her before here. I have commented on her blog a couple of times to say how wonderful her work is but I have never really considered before that blogger Katy and real Katy would ever have to merge or that I would ever meet the people whom I might engage with within the blogging community. I know that I recently attended cybermummy but actually apart from the friend who I met up with, I didn't make contact with anyone that I communicate with via my blog. Now in part, this is due to the fact that I have very few followers and only three followers that I have no prior relationship with. So, as I approached Bunny to purchase a copy of her zine 'You're out of my Gang', I suddenly felt very uncomfortable with the idea of introducing myself ... 'Hello, I'm Katy, I follow your blog', suddenly I felt like a creepy stalker. Bunny was braver than I and asked outright 'Are you the lady that comments on my blog?' to which I replied 'Yes I am'. Another zine vendor nearby overheard our conversation and laughed saying 'I know you from the Internet!!' in a sinister and comical voice, to which I replied 'I know I feel wierd!' At which point one of my children headed for the door with a busy road fairly nearby and that was that! Bizarro World! Also, Bunny referring to me as 'the Lady' reminded me that I am definitely 'an older lady' now. Good bye twenties and early thirties - Bizarro World?? When did I become 'an older woman'??
Another exciting element of the Birmingham Zine Festival was the gathering of First Fold contributors, particularly those not local to Birmingham. I got to experience my second renunion in as many weeks, meeting up with my very lovely friend Matt who I hadn't seen for around 12 years (again the power of the Internet and social networking means that of course it doesn't feel like it's been 12 years!) who I met when I was a student in Oxford (NO, Oxford Brookes University). Matt and I worked in a music store on the Singles department that sold chart music and bonded over a mutual hate of our job. In fact, the first time I met Matt, a colleague of ours (who was straight out of Bizarro World, he once pulled alongside me in his car and screamed out watching me wobble from fright on my bike, only to pull in front of me and shout 'you looked really scared, have a good week!') pre-warned me in the staff room that a new guy had started and that he was a skin head. He went into detail about all the nasty, racist stuff this new guy had been saying whilst watching me steadily getting wound up, just before I hit the shopfloor I was ready to hit 'new guy' and already had a procedure of complaint that I planned to follow the minute this guy stepped out of line, when suddenly I saw Matt! He smiled humbly and introduced himself in his lovely friendly and gentle manner at which point I turned to Martin (evil colleague of ours) with a clenched jaw and a threatening narrowing of one eye, recognising that I'd fallen for it once again!!! Bizarro World!
So anyway, there wasn't much time to spend with Matt but lovely it was all the same. Onto another lovely Matt with his three beautiful mini-me's, again a pleasure to see in person rather than communicating on line. Finally, Jim another great friend who drove from Oxford on both friday and saturday to show the fold some love! I have to give a big up to my two lovely boys who accompanied me and did lots of waiting around whilst hubby/daddy was manning the first fold stall and mummy was stuck somewhere in Bizarro World!!!
Here are some excerpts from my purchases from the day: 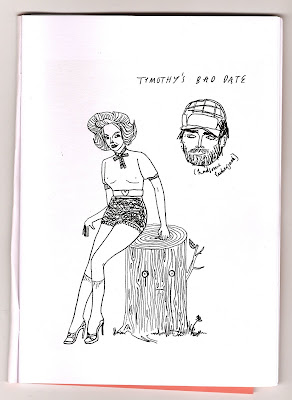 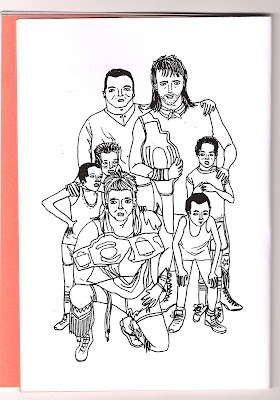 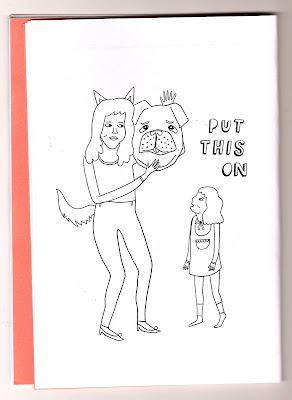 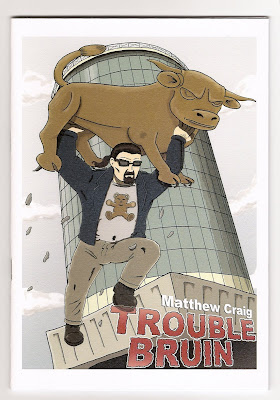 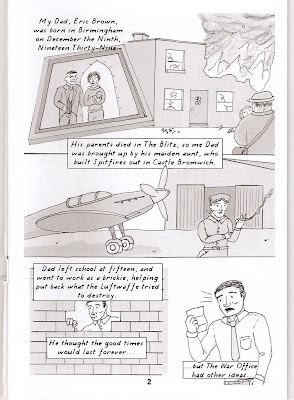 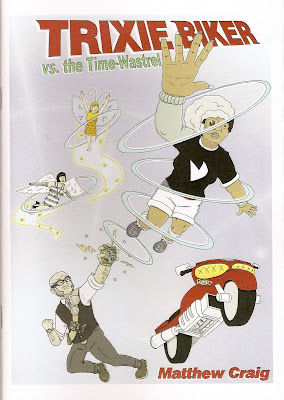 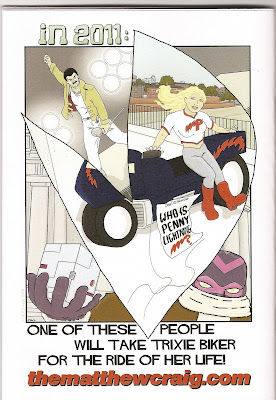 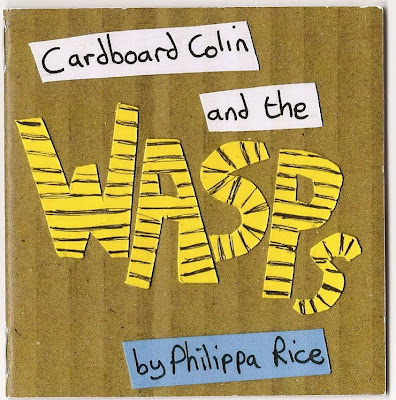 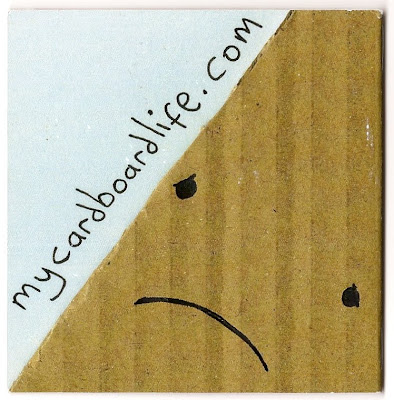 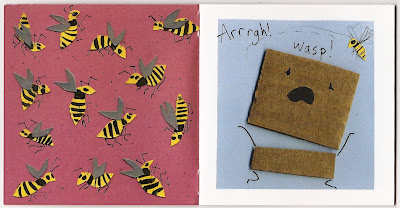 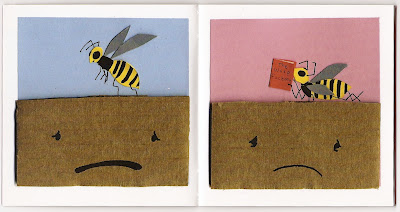 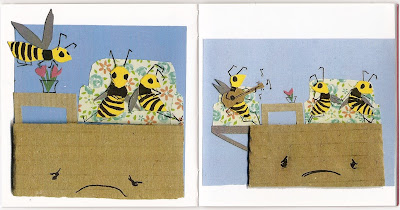 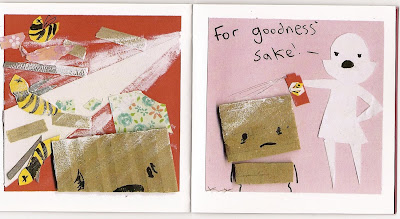 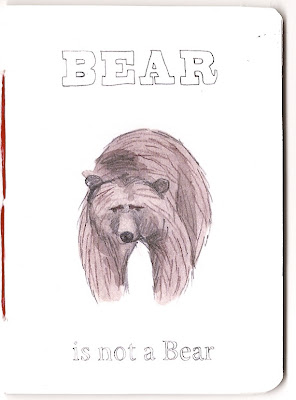 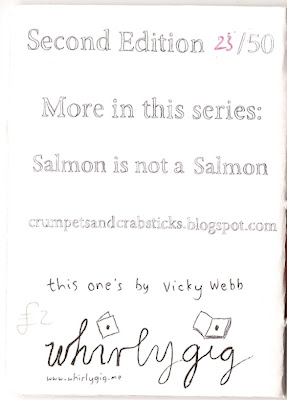 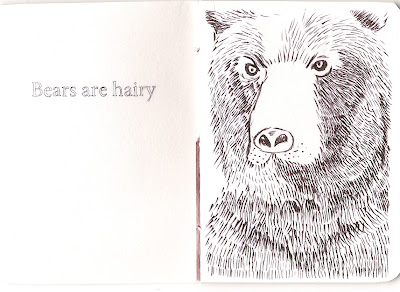 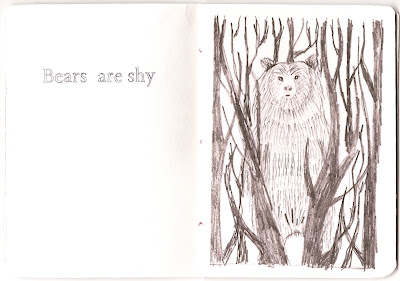 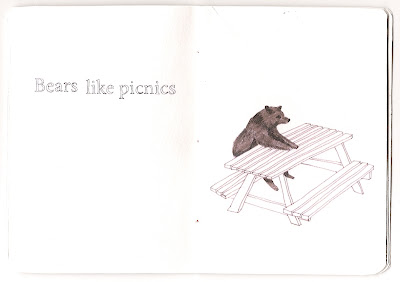 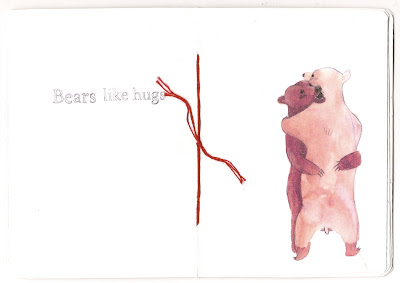 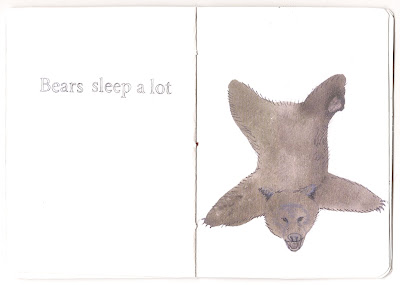 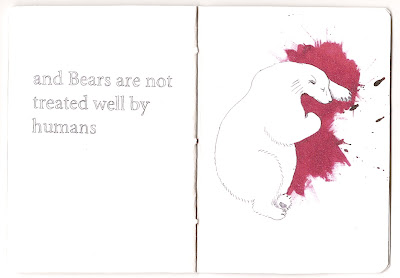 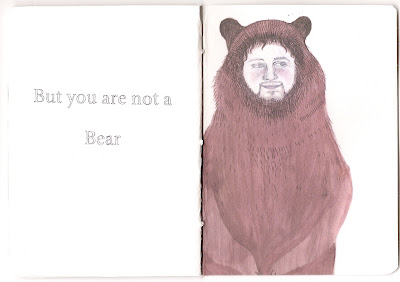 The Bear - Vicky Webb
Lastly folks, if you haven't done so already do go and check out Gareth Courage's exhibition 'From the ashes of industry we rise' at the We are Birmingham space although you will need to contact the space directly to arrange a viewing. Gareth is an amazing talent and his work looks incredible in the space!!! Also, for anyone that is interested in purchasing a copy of premier pli, they are now available!!! Contact here and one will be sent out to you asap!!!
Posted by Katy Acquaye-Tonge at 12:55