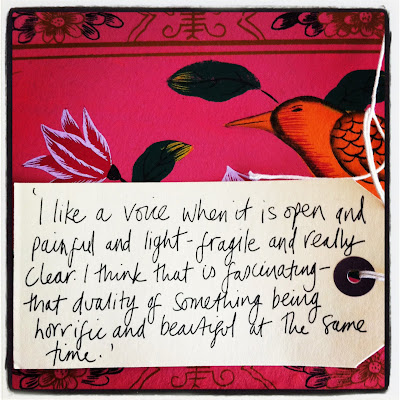 Quote by Martina Topley Bird
'Encounter with an exotic, mysterious Bird' by Bernadette McNulty for The Telegraph 15 March 2008
I have long been a fan of Martina Topley Bird and during my Papa November days she was definitely one of the voices I looked to for inspiration. In name and in nature, for me this lady really sings like a bird, her voice reaches a place in me that stirs great excitement and not just about the voice and its resonance but about sound, experimentation and melody. Recently I have been thinking a lot about how to make my seemingly disparate art practice, in it's multi media guises, well how to make it come together to form one body of work. I have felt a need for clarity, a need to complete the jigsaw as it were instead of going round in circles searching for missing pieces, aimlessly attempting to make sense of something that is quite simply - missing. I have been driving myself nuts with the whole angsty artist thing and I'm sure I've been driving that hubby of mine insane too but it is with great relief that I can say that I think it's coming together and those pieces do fit!
It was actually listening to Martina Topley Bird day and night and spending my daily time in the shower ritualistically singing my heart out (hubby's left for work by this time and the kids just ignore me!) that somehow opened up some memory box about lyric writing, song writing, my previous sound work, re-discovering folders and folders of poems and pieces of cultural theory I had written years ago specifically about memory, translocation, exile, childhood. Great material to discover in a weak moment of 'I don't know what to make work about, I don't know why I make work'.
Nearly four years ago I made a sound installation titled 'Nesting', I have mentioned it here before. I have talked previously about my frustration that the work's end product was not originally meant to be a sound installation or at least only in part but I was too afraid to break into the performance work that I have so desired to explore for years and years. At the time, I offered the excuse that as I was seven months pregnant and developing work related to themes of gestation and birth, that it would be a little too obvious to perform heavily pregnant. Of course, it was an excuse, I was just scared. I have deeply regretted that lack of bravery, that excuse. Not in a beat myself up kind of way but in that cease every opportunity kind of way. So recently whilst re-examining these thoughts and feeling the same fear about putting forward images of my recent performance piece for submission to Premier Pli II, after much procrastination I finally came to a familiar crossroad. Do I take a leap of faith and hope that bravery and risk taking will triumph? Or do I spend another 'x' amount of years regretting that once more, I was not brave? So with that in mind when hubby gave me a nudge to deliver the goods for Premier Pli II, I thought once more of the sound piece that I created for the installation 'Nesting'. All of a sudden it became very clear, I could see how my latest performance piece is an extension of many of the ideas from that 'Nesting' period. Ideas that originally explored gestation and one's early experiences/memories of sound and word in the womb, represented in the sound piece by distortion, a young baby's cries, lullaby sounds and high pitches and the notion of that shift in volume and resonance from the experience inside the 'nest' in contrast to outside of the nest when gestation is complete. The latest performance piece explores activity that occurs outside of the 'nest' or 'home', 'safeplace'. It is no longer an infant's cries and conjured world that we hear but universal explorations of childhood and play, children's games and childhood fears, memory and sounds and triggers that build a picture of nostalgia and it's meaning.
Last night I listened again to that sound piece and all the field recordings that I had considered using at that time and the edited versions that I decided against using and the individual sounds that allowed me to re-work the sound piece. I have always been an over planner, I always come to the table with too many possibilities but on this occasion it worked to my advantage because something that I thought would take hours and hours of work, something that was overwhelming me, became very simple. An updated sound piece exploring my personal interpretation of 'nostalgia'. There were old and new pieces included in this jigsaw, recordings of my eldest boy's cries aged one week old still included, field recordings of an incredible trip back to my childhood home in Ghana, high pitched sounds that make your ears tingle momentarily and that you can still hear for just a moment after it stops sounding and layers of itty bitty activity, hand movement recorded by a sensitive microphone, foot steps crunching on pebbles from far away, repetitive melodies from a baby's mobile triggered by a baby's hand movement. I LOVE sound ... and do you know what I can hear as I type away here ... birdsong, sweet birdsong from my back yard. So, I believe I've come full circle. In summary, I am very grateful to Martina Topley Bird whose beautiful bird song helped me spread my wings ...
Posted by Katy Acquaye-Tonge at 06:27