Pinch and a punch for the first day of the month


Maybe it was dangerous to have a plan but a plan was what I had in mind. On friday night the boys and I discussed ideas for saturday knowing it would just be the three of us with dad heading out with his other boys to complete recording his latest ep. The plan was to decorate the christmas tree, make festive muffins and write our x'mas wish lists whilst consuming lots of chocolate and drinking something very sweet and with the distinct possibility of staying in pyjamas all day long after a week of low level sniffles, wheezes and coughs!

Saturday morning began but not as I had planned. Elliott entered our room at 2.14am wimpering and holding his left ear announcing his earache quickly followed by him howling hysterically requesting that I 'stop the hurting'. Unable to comfort him after five minutes skin to skin and fervent prayer I gave hubby another sharp poke in the ribs and asked him to fetch the calpol, only to discover that we were out of it! I then proceeded to shout instructions from our room about crushing a paracetemol caplet and whacking a dollop of chocolate spread on top (Grandma Peppermint used to do this but with a dollop of her home made strawberry jam) whilst our little ones cries intensified. Chocolate paracetemol ingested and one unhappy and confused child later, I asked hubby to get dressed and suggested we take a trip to the children's hospital. We then snapped at one another about the various possible people that the hospital trip could involve remembering that the eldest was still fast asleep in bed and it was 2.30am and we had no one to watch the eldest and I didn't fancy leaving hubby to take the little one on his own. Whilst hubby was de-icing the car, I decided to throw my clothes on, wake the eldest and shove extra layers over his pyjamas whilst explaining what was happening. This boy is the kind of person you want around in a crisis, he's an empathic and clear thinker in these situations. He immediately looked for his and his brothers shoes, reminded me we needed coats and 'change for the car park'! He also bright as a button suggested that we take the DS's along as distraction. So, we all piled in the car and I locked up and was the last into the car at which point hubby told me that Elliott had said his ear was better now! We toed and froed about whether to proceed to the hospital mostly because mother hen wanted to get the all clear, however after a few minutes driving in the fog and hubby's reassurance that he too used to get this kind of earache as a child and that he felt sure the chocolate paracetemol had kicked in, we headed back home and back to bed. Both boys were fast asleep within minutes as was hubby, mother hen however was as restless as restless can be. The boys came through at around 7.30am bright as the sunshine and to my relief Elliott had a big smile on his face.

So, as is typical of me in a sleep deprived state, I peak really early and so by 8.45am I was on my way to the shops to stock up on calpol and supplies for entertaining the boys for the day and was back home before 10am when hubby needed to leave for his recording session. Before I had chance to put the four heavy shopping bags down, the eldest shouted a request for a second breakfast whilst the youngest declared 'mummy I missed you' followed quickly by 'shut the door, it's cold'! Still perspiring from my walk with four, yep four heavy bags and perhaps too many winter layers and thinking about my lack of  sleep yet alone my lack of a lie-in, I was NOT amused. This was NOT part of the plan.

We did decorate the tree but the kids got bored with the construction part of our artificial tree so they began watching flushed away whilst I did that. They joined in for the fun bit of adding the baubles. I shouted more than I would have liked but only when they were snatching and pulling baubles off one another. We didn't get round to making muffins, I didn't quite have the oomph to clear the dirty dishes from the night before in order to make work surface space for three plus chocolate coins were happily being consumed. Tick. Chocolate coins were in the plan.

We were all obviously tired and when the boys began bickering and then heckling one another, after several warnings I sent them both up to bed. Elliott was exhausted and clearly needed sleep but then I realised that the eldest would never surrender to sleep and so had to send him back downstairs with a watching dvd's ban. A short cuddle with Elliott and he was asleep in minutes and remained so for a couple of hours which left me with one. I explained to the eldest that I really needed to go and have a lie down, he then went on to explain just how severe his hunger pains were based on only having had four meals between 7.30am -13.15. I had hoped that the substantial food I had given him at 12.30 was going to suffice as lunch but alas I was mistaken. More food made and consumed, I announced once more that I was off to lie down. That's when he flashed those brown puppy dog eyes and said 'do you fancy watching something with me mum?' How could I resist! After some discussion I replied 'Star Wars the Clone wars it is!'. That was not part of the plan either but it felt good and I only messed on my iphone some of the time. Oh and I popped a load of washing in .... and hung it out but i was still in the room for that bit.

We didn't get round to writing our x'mas wish lists but Elliott did write some letters on our settee cover in what I suspect is permanent pen! We didn't bake muffins but I did make my eldest do the drying up of the dishes, he told me: 'I can identify with the greek slaves I've been studying about at school with all this work I'm having to do when I could be watching tv'. A rather bitter and by now exhausted post clone wars mummy snapped something about life being hard and not always being about doing things that are fun, I know at some point in the lecture I said 'I don't find it fun cleaning the toilet everyday or sorting the washing out' ....

There was calm amidst the storm however and we were all wide eyed and almost motionless huddled together on the settee as Zach and I took turns reading aloud from Charlie and the Chocolate Factory. In this quiet time I began reflecting on our day and how it had not turned out as I had planned and whilst I felt pleased that the boys had remained in their pyjamas all day and it had indeed been a quiet day indoors that was definitely needed, I also felt a little disappointed and like I'd not been the cool mum that I'd written into the plan. But then when those boys of mine were put to bed and prayers were said, one boy said how thankful he was for a 'FANTASTIC' day and for  'such a great mum'! And I am thankful for this different perspective, thankful for this boys own plan and thankful that this day is done. 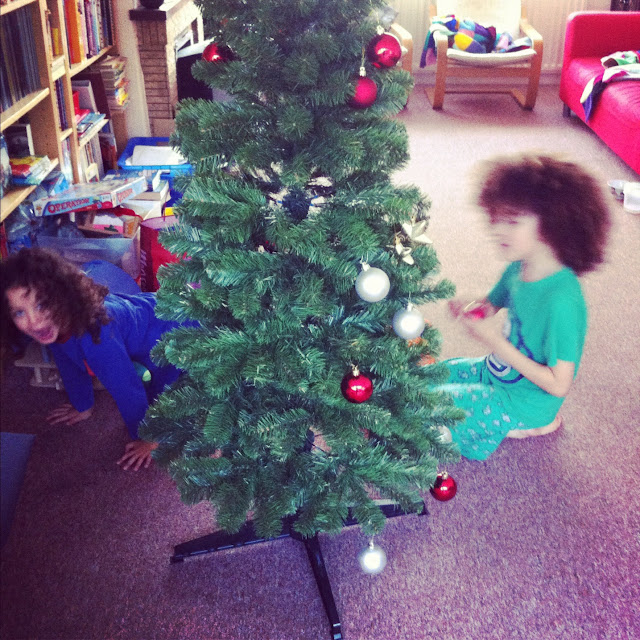 Posted by Katy Acquaye-Tonge at 15:10

Email ThisBlogThis!Share to TwitterShare to FacebookShare to Pinterest
Labels: Christmas, december, pinch and a punch for the first day of the month